Champions Of Magic Coming to the Kauffman Center this April 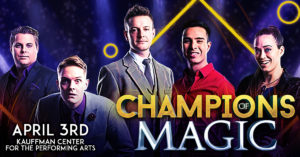 The illusionists who make up Champions of Magic will share their mind-bending theatrical production with a Kauffman Center audience during their second North American tour, which launched this fall. Magicians Alex McAleer, Kayla Drescher, Fernando Velasco, and the group Young & Strange will amaze the audience with incredible mind reading, stunning close-up magic, and daring large-scale illusions. Following sold-out shows around the world, rave reviews from audiences of all ages, and a run in London’s West End, this incredible performance will leave the entire family astounded.

The group has more than 30 million online views, in addition to a live, worldwide audience reaching the hundreds of thousands. Aside from touring, they have made on-screen appearances on The CW’s Penn & Teller: Fool Us, NBC’s Caught on Camera with Nick Cannon, The Today Show, and Access Hollywood Live. Each team member specializes in a different type of magic: illusionists Young & Strange, close-up magician Kayla Drescher, escapologist Fernando Velasco, and mind reader Alex McAleer.

Champions Of Magic shares incredible interactive magic, an impossible escape from Houdini’s water torture cell, a mind blowing prediction that must be seen to be believed, levitation high above the stage, and a finale beyond explanation. From unbelievable mind reading and stunning close-up tricks, to massive stage-filling illusions, these magicians were born to amaze.

“Spectacular family show… take a seat and prepare to be astounded, astonished and amazed.” – iHeart Radio

“You have to check them out! That was tremendous!” – Access Hollywood Live