The Kauffman Center is thrilled to welcome The Beatles’ tribute tour – It Was Fifty Years Ago Today – Tour 2019 – to Muriel Kauffman Theatre on Thursday, October 3, as part of its 2019-2020 Kauffman Center Presents series. This tribute to The Beatles’ White Album features performers Christopher Cross, Todd Rundgren, Micky Dolenz (The Monkees), Jason Scheff (Chicago), Joey Molland (Badfinger) and musical director Joey Curatolo, director of RAIN: A Tribute to The Beatles. The troupe of legendary musicians will perform their own greatest hits along with honoring one of the world’s most influential albums through a must-see live performance of The White Album.

Tickets for this once-in-a-lifetime event are available now and range from $49 to $109 plus fees, and VIP packages are available. Tickets are available through the Kauffman Center Box Office at (816) 994-7222 or online. 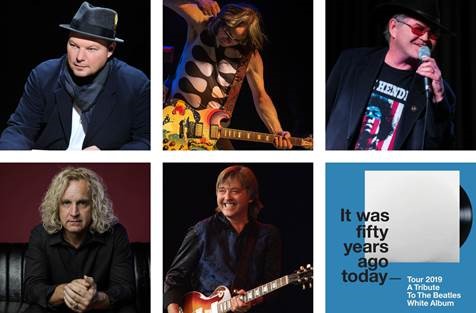 Christopher Cross is a five-time GRAMMY Award winner from San Antonio, Texas. Cross made history at the 23rd GRAMMY Awards when he won all the General Four categories (Album of the Year, Record of the Year, Song of The Year and Best New Artist). He is still the only artist in GRAMMY history to do so. Other accolades include an Academy Award, a Golden Globe, four number-one singles, and 9 million albums sold throughout his 30 -year career.

Todd Rundgren, a Philadelphia native, began his music career as the front man of the 1960s psychedelic group, Nazz. After he left the band, Rundgren made a name for himself with his album Something/Anything?, for which he sang all vocal parts, played all instruments and even acted as his own producer. His hits include “I Saw the Light,” “Hello It’s Me,” “Can We Still Be Friends” and “Bang The Drum.” In recent years, Rundgren has been a frequent member of Ringo Starr’s All Starr Band.

Micky Dolenz has done it all. Throughout his career, he has worked as an actor, singer, director, producer, writer, DJ, inventor and a top-notch performer. Dolenz is best known as the vocalist and drummer of the 1960s pop band The Monkees. The Monkees reached high levels of success from their TV show and from their recorded music. Their first five albums all went platinum, and their first four albums reached number-one spots on the charts. The band also starred in the feature cult classic film, Head. Dolenz was also a friend of The Beatles during his time in The Monkees and was even at Abbey Road Studios when they recorded Sgt. Pepper’s Lonely Hearts Club Band.

Jason Scheff is known for being the longtime tenor lead vocalist of Chicago, a band inducted into the Rock and Roll Hall of Fame. After Scheff replaced the original vocalist Peter Cetera, he went on to become one of the lead songwriters of the group. Throughout four decades, Scheff has performed with Chicago in thousands of concerts and television appearances.

Joey Molland has a five-decade career in the music industry, most notably playing guitar for classic rock band Badfinger. Molland is the only surviving member of the group and still performs their hits on worldwide tours. Molland and Badfinger have multiple connections to The Beatles, including playing on George Harrison’s All Things Must Pass and Concert for Bangladesh albums, and performing on John Lennon’s Imagine.