On March 1st, nearly 600 donors enjoyed the world premiere of Kingdom Come: The Making of Casavant Opus 3875. This fascinating documentary goes behind the scenes to chronicle the design, manufacture and unveiling of the Julia Irene Kauffman Casavant Organ, Opus 3875. You can watch the film when it is featured on KCPT on Monday, March 16th at 9:00 pm. 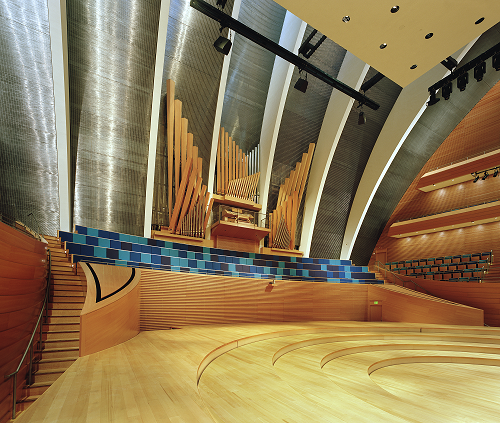 The film traces the complex task to create a powerful custom-built pipe organ, known as “The King of Instruments,” for a modern concert hall. It records the artistry and craftwork of the men and women at the Casavant Frères workshop in Saint-Hyacinthe, Quebec. The story follows truckloads of handmade parts arriving in Kansas City and documents the elaborate process to assemble the massive five-story support structure, delicate instrumentation and precise individual voicing of each of the organ’s 5,548 pipes.

In addition to showing the making of the organ, the film tells the story by featuring interviews with key people in Canada and Kansas City. With the instrument in place, the film records history in the making as world-renowned organist James David Christie takes the stage at Helzberg Hall to play the organ for the first time.

Ultimately, the film tells the story of a city’s commitment to the arts and the imagination, invention and careful human touch that inspires a creative legacy for musical artists and audiences to admire for generations to come.