Become a Member Now
A A A
Please note changes to performances and events due to COVID-19. For updates, refer to kauffmancenter.org/coronavirus.

Two bands with New Orleans-inspired rhythms will perform a quirky mix of jazz, folk, punk rock and a “musical gumbo” of bebop jazz, funk and R&B 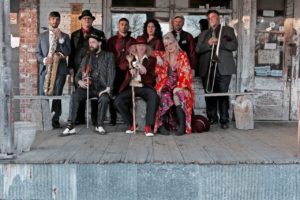 Squirrel Nut Zippers and The Dirty Dozen Brass Band will perform in Muriel Kauffman Theatre on Saturday, February 1, 2020. Squirrel Nut Zippers began their music journey in Chapel Hill, North Carolina, in the mid-1990s. The group started as a casual musical foray among family and friends and quickly began attracting a national following with their mix of jazz chords, folk music and punk rock sound. Between 1995 and 2000, the band sold three million albums. Their pivotal album Hot (1996) broke free of jazz stereotypes, taking their signature style of anti-establishment sound to commercial radio.

Years later, Squirrel Nut Zippers emerged from a lengthy recording hiatus, reinvigorated, reinvested and rejuvenated with an all-star cast of New Orleans musicians determined to reignite the band’s unique, enigmatic sound. The result was their first studio album in 18 years, Beasts of Burgundy. The album’s name is a handsome moniker referring to Burgundy Street in New Orleans. The album itself heralds the band’s mission while offering a fresh objective of its own – a hand-tailored thrift store suit of songs, stitched into one complete body of material.

In the past few years, Squirrel Nut Zippers have spent time on the road honing their sound and further developing the band’s chemistry. 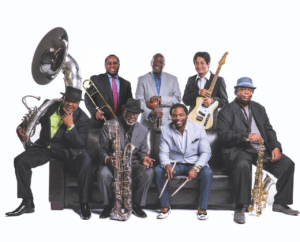 Known for their high-octane performances and genre-bending romps, the band is now celebrating more than 40 years of their unique “musical gumbo” sound – a  blend of funk, R&B and bebop jazz . They have toured in more than 30 countries across five continents and recorded 12 studio albums. Their nontraditional sound has led them to collaborate with many artists, including Modest Mouse and Norah Jones.

Tickets for the event range from $29 to $49, plus applicable fees,and can be found at the Kauffman Center Box Office, by calling (816) 994-7222 or online at kauffmancenter.org.