You may not have noticed, but the entire steel structure of the Kauffman Center moved in the past month. Well, it only moved a couple of inches, but that it moved at all is remarkable. This is part of the “tensioning process” that is critical to the stability of the Kauffman Center design. It also enables the luxurious ceiling and walls made of glass to sweep so graciously, but securely, over patrons below.

“The pull,” as the construction team refers to the process that moved the steel structure, was done by crews from the subcontractor BSC using sophisticated measurements, precise technology and large hydraulic jacks. The precise engineering process takes place slowly over a month period, focusing on one portion of the steel grid at a time. An understated Matt Jansen, project manager with JE Dunn Construction Company, admits, “It’s a gigantic engineering feat.” 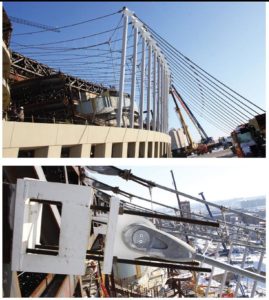 The Kauffman Center architectural design calls for a steel infrastructure and a cable supported system, something not common to most buildings. This requires the construction team to first build a typical steel structure. Then they tension cable support between that steel framework and the concrete anchor wall separating the building from the garage.

The glass lobby, a signature aspect of the Kauffman Center design, was engineered by Novum Structures. They are supported in their work by two local subcontractors: BSC, that focuses on the steel aspects of the lobby construction (including the pull) and Bratton that installs the glass.

Twenty-seven steel columns, gently angled like tent poles, are attached by cables to the existing steel infrastructure of the halls and to the concrete anchor wall near the parking garage below. The anchor wall is 50 feet high, four feet thick and 360 feet long.

Additional complexity in this stage of construction arises from the need for guttering, lighting and heaters near where the roof meets the south wall.

In addition, another large engineering feat will take place when four cables are installed east to west across the roof’s edge to create a snow fence that catches and keeps snow in place until melted. 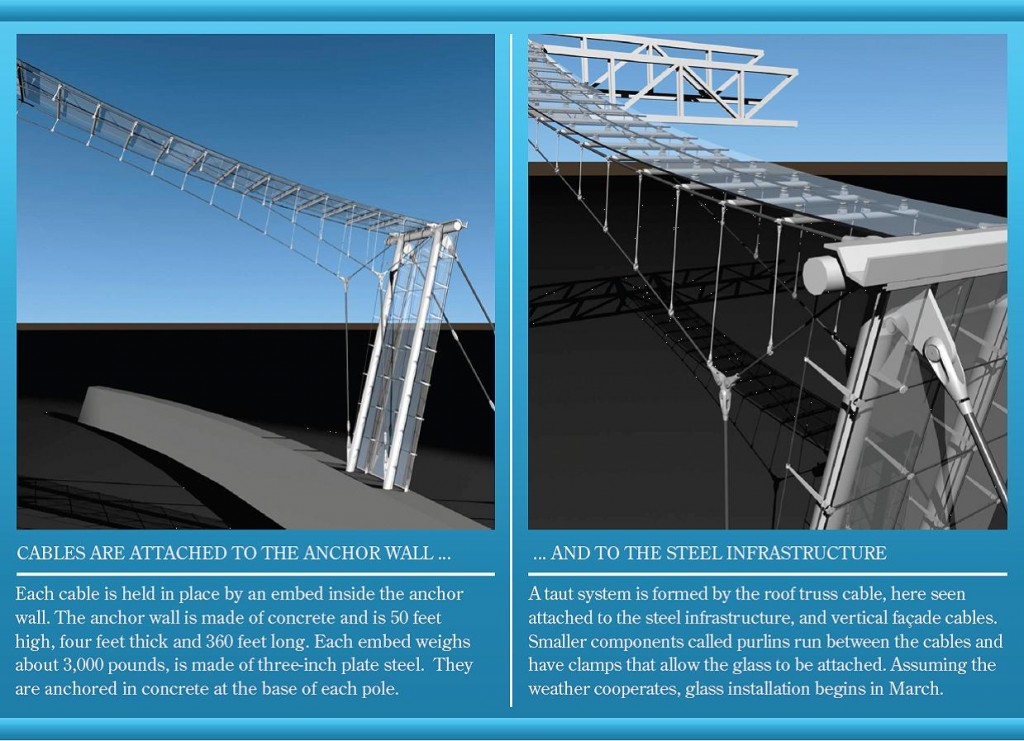