Performances will reach new heights in the proscenium theatre 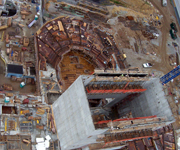 Right now the stage tower is the tallest structure at the Kauffman Center construction site, clearly visible from a car driving down Broadway. However, the huge stage tower, seen in the lower right corner of this aerial photo, will soon be hidden out of sight by steel and even more concrete.

So what precisely will go on inside this 74-foot tall structure rising above the stage? Flying scenery, catwalks and a huge loading dock are in the works, all eagerly anticipated by two resident companies, the Kansas City Ballet and the Lyric Opera.

In the Kauffman Center’s 1,800 seat proscenium theatre, the audience will sit facing the stage and view performances through a rectangular opening, like they do at many Kansas City venues. However, most comparisons stop there.

Above the stage where the Kansas City Ballet and the Lyric Opera will perform, looms a 74-foot tall stage tower that plays a critical role in the theatrical experience. Its volume and rigging systems will allow technical crews to hang lighting, sets and other equipment directly above the stage area — and lower onto the stage as needed.

“It should expand our capacity to stage a production in cooperation with the larger opera companies,” remarks Evan Luskin, general manager of the Lyric Opera. “In the past we were often the smallest company and joint productions often had to be scaled back to accommodate our space restrictions.”

“We would like now and again to produce more of the full-length story ballets similar to our successful Romeo and Juliet last season,” shares Jeffrey Bentley, executive director of the Kansas City Ballet. “Most of our brethren companies, from whom we rent sets and costumes, almost always perform in larger halls and build their full-length productions on a scale that doesn’t work for us in the Lyric.”

At the highest level of the tower is a fully walkable rigging grid, something missing from many stage towers due to height restrictions. Technicians access this steel structure by elevator or stairs. They can then walk above the fly loft to adjust the lift lines and loft-blocks of the counterweight system. Theaters without this space have fixed, less flexible, systems. 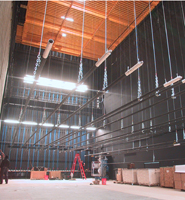 The tower also houses state-of-the-art rigging and lighting systems. Rigging (like those shown in the small stage tower to the right) allows equipment on the stage to be raised, lowered, rotated and moved from side to side. It also serves practical functions, like hanging and masking lighting and provides dramatic effect when used to move scenery and arrange draperies.

Two catwalks, called galleries, are positioned on each side of the stage house. A mid-gallery catwalk is in place specifically for automated use during a production. “This is an accommodation for modern scenic techniques that use a lot of motorized or tracking scenery,” Ferguson explains. Galleries are used to hang scenery, to feed electrical and dimming equipment and to access the counterweight fly system.

According to Ferguson, “This makes the stage tremendously flexible. A smaller ballet, for example, won’t feel lost on the stage, while a Wagner opera will have plenty of space for the large scenery and cast.” Ferguson emphasizes that all dimensions are tailored to the size of this particular hall. “We’ve worked very hard with the architect, Moshe Safdie, to make both halls intimate, with audiences as close to performers as possible.”