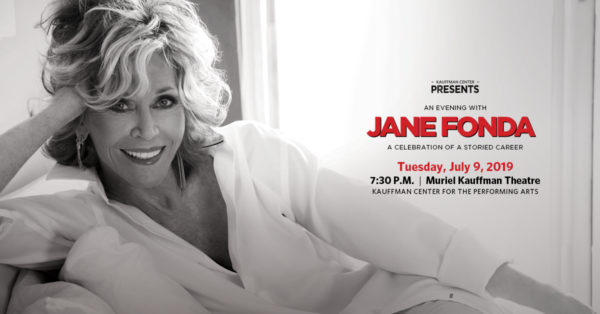 Jane Fonda will share anecdotes from a lifetime of film and activism on July 9, 2019, in Muriel Kauffman Theatre. An Evening with Jane Fonda: A Celebration of a Storied Career will be a career retrospective live on stage, including film and TV clips, stories and an audience Q&A. The event is the first to be announced as part of the 2019-2020 Kauffman Center Presents series.

Tickets for this event range from $49 to $250 plus applicable fees and are on sale now. VIP tickets include a premium seat and a post-show photo opportunity with Jane Fonda.

Jane Fonda is a two-time Academy Award winner (Best Actress in 1971 for Klute and in 1978 for Coming Home), a three-time Golden Globe winner and was the 2014 recipient of the AFI Life Achievement Award. Along with starring roles in dozens of highly acclaimed productions, Fonda is also credited as a film and television producer.

Not limited to the big screen, Fonda has influenced society in many ways over the years. Off screen, she is an impassioned philanthropist and activist supporting numerous causes to which she is deeply committed. Her aerobic-exercise videos in the 1980s helped shape a fitness craze that is still going strong today while also revolutionizing women’s health and representation in the fitness world. The original Jane Fonda’s Workout video remains the top grossing home video of all time. Her television projects (including HBO’s The Newsroom and Netflix’s Grace and Frankie), best-selling books (including My Life So Far and Prime Time) and movies (including Barbarella, On Golden Pond and 9 to 5) have made her a true living legend.