Putting Supertitles in their Place 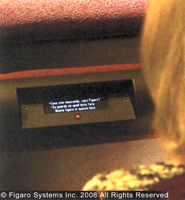 For the last 10 years, Kansas City patrons have become accustomed to enjoying opera in its original language, aided by supertitle translations of lyrics and dialogue projected above the stage at the Lyric Theatre.

At the Kauffman Center, audiences will have an even more personalized way to enjoy opera through an advanced titling system now being used in many theaters around the country. Each patron can choose to see the titles right at their seat. Or not. How’s that possible? “Figaro! Figaro!”

Figaro’s Simultext ® is an innovation that came about over margaritas at Maria’s in Sante Fe. The accompanying conversation was about how to make performances more accessible for patrons who had difficulty hearing at the Sante Fe Opera.

Afterwards, founder Patrick Markle worked with two other opera professionals to devise the first prototype of a personal device that takes titles directly to patrons’ seats. They soon saw that it had benefits for all theater-goers. “We think of it as a dashboard for the arts and more,” Markle says.

As a result, the Kauffman Center’s Proscenium Theatre will be outfitted with small screens behind each seat that provide the ultimate in personal choice. Markle likes to say that, with Figaro Simultext ®, “Titles are put in their place — where each patron can see them if they want and when they want.”

The system can deliver the words sung or spoken by single or multiple performers, three lines of text to each screen. Patrons decide if they want to see the titles and then they select the language of their choice. If they choose not to see titles, they simply touch the “off button” on their individual screen.

“The Figaro System has many advantages for our patrons,” says Ward Holmquist, musical director for the Kansas City Lyric Opera. “There will be no more “˜blind spots’ where titles can’t be read. Plus, audience members close to the stage will no longer have to crane their necks to see the titles.”

The Ballet could use the system to provide scene synopses. A lecturer speaking in Russian could be translated for the audience — in up to six languages. A theatre company could provide programming notes, casting changes or welcome a particular group of ticket holders.

Each screen is ergonomically placed just below the audience member’s view of the stage, well within a comfortable viewing angle. Importantly, each unit has a “privacy screen” so that they do not interfere with a neighbor’s enjoyment of what’s on stage.

In addition, the screens have soft lighting, not a TV-like glare. The OLED screens (organic light emitting diodes) display clear text in six languages and can fade fully, meaning that they do not constantly glow (like an LCD screen does). Plus, they are ultra-low in energy consumption.

“We’re grateful that a number of donors helped us to make Figaro available for Kansas City audiences,” says Jane Chu, President and CEO of the Kauffman Center. “It’s just one more way to assure that future performing arts experiences will be exceptional and available for everyone.”